Coming Back to Sego Lily School

Last spring, I (Jen) wrote a post called "When self-directed learning means going to school... somewhere else." It was about my oldest, who had been a Sego Lily student from the age of 5, choosing to attend a pubic high school. When that ended, it was hard to write about. I ended up posting the 'results' on my personal blog, rather than the Sego Lily School blog. It was too raw for me to write about in a more public way.

However, many people have asked how it went. Below are some excerpts that outline the basic experience. I am happy to say that Corbin is back at Sego Lily School this year, and plans to write a thesis for graduation. If you want to know more, stop by and ask Corbin. Just be prepared, he may have some colorful language to use to describe his time at Granger High.


First, the good stuff: Corbin did well in his classes. He was proud that he passed all of his classes at the end of his first term, especially since he started late and had to catch up to make those grades. He even did well with math - he and I spent several evenings together while I helped him with algebra and geometry, and he managed to pick up most of it very quickly. He enjoyed his photography class, and even won an award at the district art show for one of his 3-D art class projects. He learned a lot about free speech - including the fact that you will face resistance when what you have to say goes against the grain. He also made a few friends, and got to see what education looks like for most people his age. 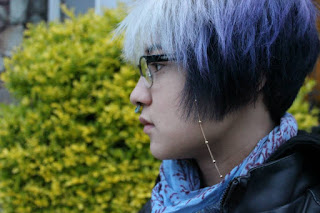 The negatives, however, far outweighed the positives. Corbin felt bullied every day. As a non-straight, gender fluid person, he struggled to find acceptance. He listened to others debate his gender behind his back. Even at the GSA after school club (gay straight alliance), he found no one who could see outside our society's binary structure of gay or straight, male or female. He experienced bullying from teachers as well - when he chose not to stand for the pledge, one teacher responded with his personal views about his military service, leaving Corbin feeling as though he was being pressured to take actions he strongly opposes. Corbin also shared many stories with me of being the only person in a class with any knowledge of, or interest in, the subject matter. He was experiencing the all-too-real dynamic of kids who don't care about learning. He wasn't always enthusiastic about everything he was doing, but I heard in his voice the sadness of being the only one who seemed to care.

So much of what was happening, though, was intangible. My kid - the one who has always been opinionated, but has also always been up for a good conversation - stopped talking. He took on a victim mentality, and started speaking as though he was hopeless and had no choice in his life. One night we were talking about his future, and he stated that his only goal was to make enough money to live. He no longer cared about college, or any meaningful career, and all he wanted to do was get out of the house as soon as possible. Then some things happened, and we withdrew him from school. I knew it was the right choice, even though we had told him he would have to finish the year if he wanted to try public school. We negotiated a different solution, and pulled him out the next day.

Within a day, he was talking to me about where he was going (including exact addresses), how he was feeling, and what he wanted to do. Within a week, he had opened up about some personal stresses he has been struggling with. He got to work on Odyssey props, starting communicating with his brothers, and became happy again. It was like a light came back on in him.

Here's the thing about resiliency. We tell parents who come to Sego Lily School that yes, their children will learn to read and write, and add, and everything else they need to know to be successful in the world, but more importantly they will learn lessons about who they are, how they learn, and who they want to be in their lives. I can honestly say that those lessons are things Corbin learned. Yes, he needed a reminder and a nudge to remember that he learned them, but without those lessons I fear we would be facing intensive therapy with him right now. Instead, he bounced back into being my opinionated, vocal, amazing child. Yes, he's a tired teenager, busy trying to figure out how the world works, but he is OK. He isn't broken, that's for sure.

I'm not one to say "I told you so," but I will say this. When Corbin was little, I knew that a standard educational experience was not going to work for him. I decided to take on the joys, stresses, workload, and insanity of starting a school and keeping it alive for him, and for his brothers. I say to you now, my children - this is for you. It was the right thing to do, and it continues to be the right place for me to put my time and energy. I won't question that again after this experience (well, I might, but in those moments I will remind myself of this moment). I'm sorry we had to learn a lesson in such a painful way, but it was worth it.
Posted by Sego Lily School at 1:51 PM

Sego Lily School
Salt Lake City, Utah, United States
We are a school where children love to be. Sego Lily School is a democratic learning environment, a place of self-discovery,where imagination and education meet. Here children are invited to freely dream, create, and pursue their passions.

Children are naturally curious and want to learn. We feel it is the job of a school to nurture that curiosity. Providing our students with the time, facilities and support (when requested) to pursue their interests and unique talents is our ultimate goal.

Students of all ages can learn with and from each other. Children from age 4-18 mix freely at Sego Lily School.

Play is the language of children. Children of all ages learn through play. Play takes many forms, from a game of catch to a creative endeavor, but all forms of play are a valid and important part of a person’s development.

Learning happens everywhere, all of the time. Learning takes place in formal and informal settings, in large or small groups, with or without staff members or mentors, but all learning is initiated by the student.

Decisions should be made by the people they affect. Sego Lily School is run by the students and staff, through the weekly School Meeting. Each student and staff member has one equal vote in this managing body. The Judicial Committee, also composed of students and staff, handles rule infractions. Parents have a role in setting school policies through the Assembly, which meets annually or as needed.

1. How do children learn at Sego Lily School?
Children are naturally curious and want to learn about their environment. When a student is given the responsibility for his education, as well as the freedom, support, and respect needed to fulfill his goals, learning begins to take place as a natural byproduct of all activities. Children challenge themselves and each other as they gain confidence and learn new skills.

2. Will my child learn everything she needs to know?
The basic knowledge of reading, writing, and math that are used by adults on a daily basis cannot be avoided by a student who is experimenting with her interests and passions. There will come a time for each student when learning these skills becomes essential to pursuing the path she is following. Allowing children to follow their own time lines can actually increase their learning curves – when motivated to read, for example, a child will throw herself into the task, learning more quickly than a child who is being told, “Now is the time to learn this.”

3. Do the students really run the school?
Yes! Students and staff work together to run the Sego Lily School. The students and staff members each have one vote in the weekly School Meeting and make all decisions needed for the school to run smoothly, including passing laws, allocating funds, and hiring staff. The Judicial Committee, composed of students and staff, handles rule infractions. School Meeting members also have a vote in the Assembly, the larger voting body which includes parents and board members, in making policy decisions such as setting tuition rates and approving the annual budget.

4. How does graduation work?
Each student, upon completing the requirements for graduation, must write and present a thesis. The topic of this thesis is “I am prepared to become a responsible adult in society.” The student must defend this thesis at the annual meeting of the Assembly. After receiving a favorable vote from Assembly members, students will receive a Certificate of Graduation. State regulations in Utah do not allow us to be accredited or to issue official state diplomas. However, most colleges will accept graduation certificates from non-accredited schools or a GED.

5. What about college?
Many students will want to continue their educations with some form of higher learning – college, university, or trade school. For these students, the statistics from the Sudbury Valley School (SVS) are in their favor! 90% of students that attended SVS from 1968 to 2004 went on to some form of secondary education. Most of these students were accepted into the school of their first choice. Students simply take their SATs and write essays for their applications, and interview with administrators when necessary. Usually a certificate of graduation is adequate for admissions. Current statistical trends in higher education suggest that having an “alternative” education is actually a benefit in the admissions process. Many prestigious schools such as Harvard and Yale Universities are looking for students who can do much more than learn what is placed in front of them. We are happy to support our students in any way we can with their application process.

Promote Your Page Too